Our December meeting was hosted by Reed Smith.

The firm's largest office is in London, where we have nearly 350 lawyers serving international and domestic clients. From London, we specialise in all aspects of English law involving trade, litigation and commercial concerns.

Our lawyers undertake all forms of inward investment to the United Kingdom, as well as matters arising with business concerns overseas. Two-thirds of our work has a cross-border dimension and our clients range from the largest FTSE 100 companies, to SMEs positioning themselves for London listings. One unique aspect is our especially strong reputation for client service, a notable string to our bow for which we regularly receive public endorsements. 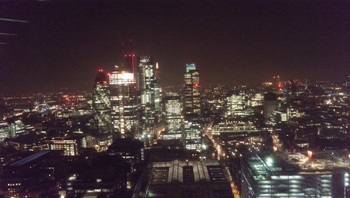 Guest Speaker
Charlie Lass - The MIT Sloan School of Management MBA
Have you ever wondered what it is like to be on an MBA programme?
Charlie Lass, a serial entrepreneur, who has started and built 3 businesses, has won a place on the MIT Executive MBA programme. He shared his excitement and challenges of being at this 100 year old leading management school.

"For me the combination of cutting edge technology, innovation and entrepreneurship was irresistible and as has already been demonstrated to me by the people I will be working with and the attitude of the school, there is no limit to what can be achieved by MIT. It is going to be a tough, intense but I hope hugely rewarding 20 months".

Charlie is treading in the footsteps of some of the Greats: The alumni include: Professor Myron Scholes and Fischer Black, who create the Black-Scholes option pricing model and Kofi Annan, Former Secretary-General of the United Nations, Nobel Peace Prize 2001.

Charlie is one of our most consistent serial entrepreneurs. He first presented Viapost at our November 2007 meeting, and returned with an update in March 2009. After successfully exiting he returned in January 2011 and presented ControlPoint. This exit was followed by his next venture: The Open Energy Market in November 2012. Charlie was also a key part of the 3Cs 10 year anniversary.

Charlie told us the admission processes that he had to go through (only 1 in 50 applicants are accepted); what it is like to be at this world leading management school and what he has learned, even as a successful, experienced serial entrepreneur - and the people and facilities he can call upon.

Nasir Hussain -
Prometheus Investment TechnologySome of the biggest challenges in raising angel finance is the time and cost of due diligence that angels need to carry out but often don't and then say no to an investment with the twin problem that entrepreneurs are just not investment aware or ready. Created by experienced entrepreneurs, investors and their advisors, Prometheus Investment Technologies (PIT) is an early-stage FinTech company commercialising a comprehensive system to operationalise investment due diligence across multiple projects, investment opportunities, business sectors, and lifecycles. It aims to personalise scalable due diligence for Angel Investors and accelerate the investment readiness of Lean Entrepreneurs

There is virtually no commercially available system which addresses pre-revenue equity investment. Founding entrepreneurs and pre-revenue investors face a common problem: how to prepare for and execute "due diligence"? While they come at it from opposite directions, both parties want to be involved in projects which have the highest likelihood of delivering a return for stakeholders. As pre-revenue due diligence remains a financial dark art, PIT addresses this gap in the market and enables direct investment in pre-revenue companies through their Lean MVP SEIS Fund 1 with the development of Software-as-a-Service technologies to serve both the entrepreneur and investment communities.

Roman Gaufman - XanviewXanview is a technology company offering innovation in monitoring solutions for home and business owners. The company was established in 2009 after three years of research and development under the name of Fusetech. The company's head offices are based in London, United Kingdom with global offices operating in Israel and Russia.

The Xanview Portal is a delightful and easy to use web application that allows you to stay aware and in control by monitoring, recording, replaying, listening to and controlling your home, business and livelihood.

Spend just 5 minutes with the Portal and you will discover how truly productive you will become. And soon you will realise that you can't live without it. By dropping the operator assumption, it requires no technical background and can be operated by virtually anyone.

Rafael Dos Santos -
Room in the Moon Andre Rafael dos Santos is a Brazilian entrepreneur who moved to London in 2001 after living in Sao Paulo - one of the world's largest cities. In London, he started out doing menial jobs to pay his way in. Rafael decided to turn his experience in living in flatshares into a property business. In 2005 he launched londonup.com, a small business that manages and lets rooms in flatshares.

Rafael wrote a book 'Moving Abroad - one step at a time' which is dedicated to helping people who are going to another country. 'I want people to understand each stage of their journey abroad, conquer their fears, celebrate their achievements and live a happy life while away from their home country'.

In 2014 he launched the startup Room in the Moon, a social network that connects people who are moving or planning to live abroad. We help students and young professionals find a home, learn about a city and make friends, before moving there. Members can connect with locals and exchange info about places via videos and posts.

Also he was the organiser of the 2-Day International Conference for Startups London, an event for 300 people with speakers from KPMG, Oracle and Rachel Elnaugh, co-founder source.tv and Former Dragon's Den 'Dragon'. Rafael also runs workshops about Culture, Business and Video Marketing for Business.

** Rafael's presentation was voted the best business pitch by the audience.